King's Cross is now a snazzy new station. Everything has been changed and spruced up. Most of it is good to look at and easy to use - a successful piece of design. Most of it; but there's an exception. The taxi rank is a terrible, useless, amateur piece of design.

The passenger queue is a system that has long been abandoned elsewhere. Without constant supervision, its multiple lanes lead to inevitable accusations of queue jumping by frustrated passengers, often without the offending person knowing they are doing it. Tempers rise, fists are raised, heads are shaken.

If the passenger in the frontmost queue has any difficulties getting into the cab, if the driver has to get out and help, even if there's a full complement of fares trying to get in, all the taxis behind have to wait. The queues lengthen again. People walk off down the street to get into a cab in the long waiting line; but they are disappointed because the cabbies aren't allowed to pick them up there. They walk back and are refused their previous position at the front of the queue. Anger ensues.

Impatient passengers step out to meet the long awaited taxi, who stops for the fare a few yards before the designated pickup point. Result: there is now one fewer taxi in this batch of pickups. More frustration, more anger.

There is a second lane beside the taxi pickup lane, but it is never used. If there were slip roads out from the pickup lane, this second lane could be used to overtake and leave by taxis currently stuck behind a slow pickup, thus keeping the flow moving.

If there were actual markings on the pavement and the road for passengers to stand in and for taxis to stop at, there would be more equality.

If, as at Paddington, everyone joined the same queue, there would be no perception of queue jumping; instead, passengers at the head of the queue would go and stand in the next empty passenger circle, and the cabs would pull up in the right place.

The system, as it stands, would work better if the cabs simply picked fares up from a queue at the side of the road, as has happened for years and years and years.

If the so-called designers had bothered to talk to taxi drivers, this would never have been built. But they didn't, and so there's always a subject that you and the taxi driver can agree on when you get into a cab at King's Cross.

Suarez has a reputation, not only as an exceptional footballer but also, as an exceptionally nasty person.  So why would the owner of Liverpool Football Club deliver a humiliating public rebuke to him? The only likely result is a series of petulant rebellions, some on "principle", others purely out of sustained, seething anger at being denied champions league football by a club which still can't admit the extent of its decline.

The dickheaded foolishness continues beyond Anfield, all the way south to Ashburton Grove, where the Arsenal  are still without a major signing. It should be made clear that this is not Wenger's fault. He is there to craft and polish a football team, to manage those provided to him by the club, not as the primary agent for acquiring new talent. He can't do deals and deal-makers are needed for the transfer business.

It is the club's fault that he has made no significant signings and the club are exemplified by the board. It's at their table that the buck stops. Their incompetence, their inability to understand just what an unfilled gap is still there in David Dein's vacated chair, has resulted in the whole in-out imbalance. When a club sells players like Fabregas and Van Persie it either replaces them with bods of a similar stature or it declines.

Arsenal is in decline, make no mistake about it, and has been since the departure of TH. The board have done nothing to change this for several years.

There is not one single director who has shown themselves to understand the modern game, they have all spoken with a smug self-satisfaction which defies reason, and the elephant-sized arsery of Peter Hill Wood, charming as he may be, pervades every corner of the room.

At the moment, watching Arsenal in the transfer window is like watching Michael Foot trying to get elected: the more he says, the more sense he speaks, the more likely he is to fail, and fail miserably. This team is half a centimetre away from the precipice and I didn't become a gooner to go cliff diving. Deal with it, dickheads: dump the board and start again.

blood on the strat

I've been playing the electric guitar (a Fender Strat which belonged to my late dear brother, Henry). Having spent years (over 40) trying not to play guitar, I eventually gave in on the sad occasion  of the instrument's arrival.

Recently my enthusiasm has grown and grown - it may be something o do with the addition of a medal and a box.

I think the next thing I should get is a plectrum... 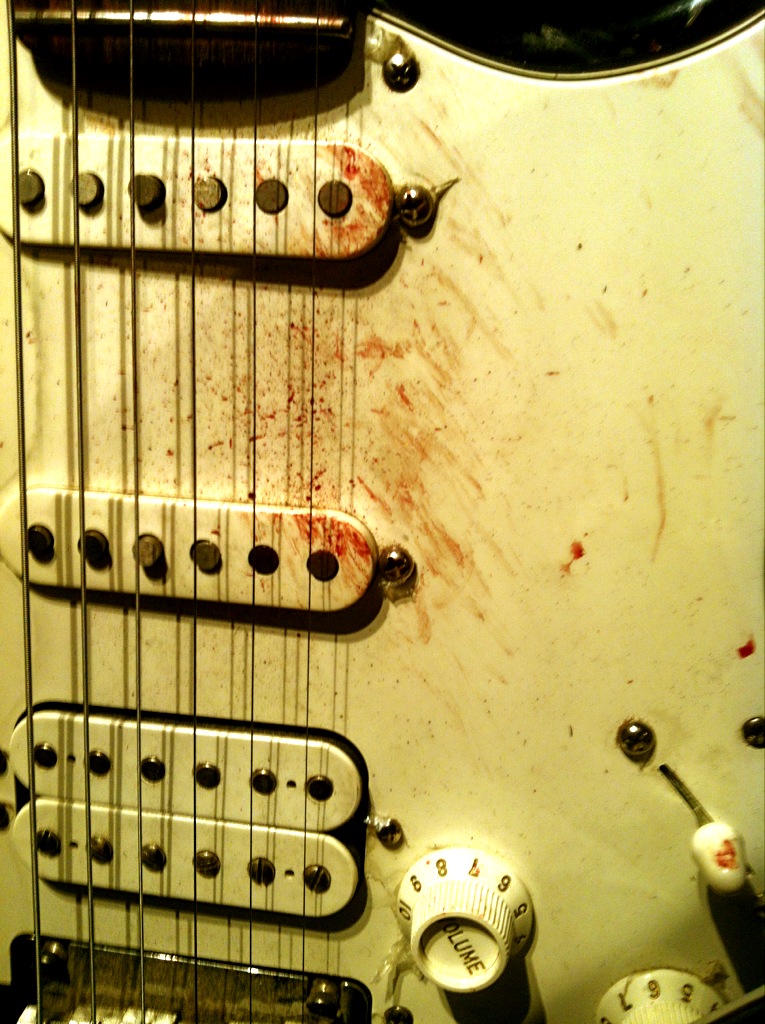 The BOF is so tired of hearing rose-tinted accounts of the bracing nature of Bogus 'mayor' Johnson's experience of sport at school that he thinks it is time to describe the torture as it really was. Generously, the BOF comes clean about his upbringing at Westbury House, a post war prep school in Arcadian Hampshire, and Eton College. Oh yes, he knows and will, for once, speak directly of his experiences.

Prepare for the change of person.

I was never good at sports of any kind, and I had no interest in them until it was too late to start playing. The first time I was picked for a school team, it was as scorer for the second XI cricket team, this only because of a summer cold laying strong boys low.

I declined, provoking a storm not unlike that associated with Oliver asking for more. What amazes me now is that I won. I did not have to fulfil the role. I was never picked again for anything, which suited me.

On to Eton, and a quick word about how it worked. There was no compulsorary two hours a day. No, it was a weekly total that mattered, and that was arrived at by a system which optimistically relied on the honesty of teenagers. We marked up a chart with Xs for the exercise we had supposedly taken.

As someone still allergic to team sports, I soon found the slacker's fallback, the cross country run.

Or, rather, the stroll(in shorts) to the Road Bridge. Shimmying up the slope of concrete, a place of safety could be found where blue tobacco smoke (and more) filled the afternoon air. A small transistor radio, a tranny, wafted 'Flowers in the Rain' or 'See Emily Play' or 'Honey'  around the new world environment of the motorway flyover.

During the summer I would row gently up the river to Queens Eyot, an island in the Thames with a bar exclusively for Etonians and a lawn on which to loll and laugh and become very drunk. How I ever rowed back, I don't know. Once, on this trip, a child's life was saved on the way there, something more satisfying than any sporting victory.

Whatever, it was not two hours of cumpulsorary sport a day. For many of us it was a daily triumph over authority. Sorry, Bogus; it was Xs, not hours that mattered. And, as every politician knoe, Xs mean votes. Come clean about your real school sporting days, Bogus.

Is now the worst
Artist in this country.

Other Criteria
Couldn't be drearier
Even if the cunt tried.
Posted by BOF at 09:47 No comments: