the tip of the dung heap

The BOF has sent word from St Tropez, where he is currently trapped. To leave the town by whatever means, one must endure the crawl along Boulevarde des Escargots which takes the traveller through the seven circles of hell that make up the Riviera. The satNav proclaims a journey of twenty minutes duration but each minute on its screen takes 5 real minutes to reduce by one.

The town (or village as they like to call it) has as its patron saint Brigitte Bardot. Seemingly without irony, her picture appears on the doors of shops selling nothing but real furs and expensive leathers. Those who wear these clothes saunter arrogantly down the cobbled streets, or cruise in Bentleys and Porsches and Ferraris and Lamborghinis and Maseratis. The BOF counted seven Range Rovers in the public car park on a quiet morning.

He is staying in a hotel which can only be described as a Eurotrash Centre of Excellence. To misquote Dylan, outside the hotel, avarice goes up on trial. 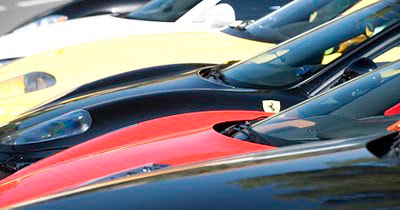 It is the casual commerce in human flesh which so astonishes. A delightful driver who has ferried the BOF to the beach with informative chatter confesses that the hotels have a real problem: they cannot, these days, distinguish the mothers from the whores. And whores there are aplenty. Mrs BOF, sitting quietly at the bar, overheard a permatanned gentleman explaining to two attentive beauties what would be required of them during the course of each day, and how he wished his companion to be treated. Later, clearly pleased by their performance, the BOF could not avoid hearing the John promising "a bonus for that!" whatever that might be.

Disgusting old men in their vile brequins are everywhere trailed by underdressed and overheeled prostitutes who make little attempt to hide their trade. At the top of the Place des Lices, the town square, is a shop which sells ludicrously overpriced and flashy clothing (more leather and fur), the sort of clobber that these revolting specimens buy as trinkets for their whores. It is called Mission Accomplished. Down at the beach, maybe at Ciquante Cinq, the women come and go. They do not talk of Michelangelo.
Posted by BOF at 10:38 No comments:

Just in case anyone's forgotten it, the BOF has suggested a quick listen to this.

on yer bike. not.

The BOF's determination that he won't be left behind by the novelties of the modern world saw him attempting to use the new public bicycle scheme in London. He'd applied for his key and it duly arrived this morning. Having lunchtime business (i.e. lunch) in Soho, it seemed a perfect opportunity for  an inaugural ride.

It was not to be. At the local dock, he chanced to meet a couple of men who were on the implementation team. They offered the tip that one should always lift and spin the back wheel before unlocking; some of the bikes have sticky back wheels, resulting in the flattest of rides still feeling like an uphill struggle.

Having found one with a free wheel, he inserted the key. Instead of the expected green light and a comforting click, a red light appeared. No go. Several bikes and three docks later, the BOF had to abandon his plan and leap into a taxi, as he was now running late. The journey was enlivened by throwing the words "bicycle hire scheme" at the taxi driver and getting exactly the hoped-for response. The cabby went straight into taxi drivers' fault-finding mode. After prodding and probing the subject for at least ten minutes, he closed the subject by saying: "You mark my words: the bleedin' idiots will get hold of them, and before you know it, the Serpentine's going to be full of 'em."

Upon his return, the BOF telephoned the scheme's offices and, as he had suspected, discovered that the key needed activation, even though the website was devoid of any information alerting the user to this vital fact.  He was told that "We are currently experiencing some IT problems." The telephonist did not sound too pleased when the BOF replied with "You mean the system's fucked?" but she reluctantly agreed that this was indeed the case.

It's not really surprising, and some ways comes as a relief. The whole scheme has been rolled out under a stealth blanket, with the docks springing up seemingly overnight. If it had worked perfectly, immediately, it would have appeared rather sinister; and the BOF feels that it would have set a bad example of efficiency to future public schemes reliant on IT. There seems to be a rule that any roll-out of IT in the public sector must take three times as long as an equivalent private scheme, should cost at least five times as much, and be so fundamentally flawed in concept and execution that it is abandoned twenty two months after delivery.

The BOF feels that this scheme is largely a Good Thing. It's a pity that one of the loathsome banks sponsors it, but then, they are the only people with any money at the moment because they won't lend it to anyone. By this time next year, we'll all know what it means when a potential visitor asks "Have you got a dock near you?" It won't be a shipping question.
Posted by BOF at 15:51 No comments: