a fitting (up) result

So Russia wins. That would be the country described yesterday as a virtual "mafia state" with widespread corruption, bribery and protection rackets.


Very appropriate. Septic and FIFA should get along with them just fine, and there won't be any irritating TV programmes telling people what they're up to. Oh dear me, no!
Posted by BOF at 17:10 No comments:

PhotoBof did what he was told, and trudged the streets. He does have a habit of trying to fit what he's looking at with some theory he has burbling in his head and on this sort of occasion it's usually a theory about police tactics. At the G20 he was convinced that he'd found the safety valve in the kettle. Talking to a policeman about this yesterday (have they all been on media-friendliness courses?) he was told that various students had said they didn't want to be kettled today "so we're trying something different."

That something was pied piper policing. Small columns of police, about fifteen or twenty, would set off in single file, walking to begin with, and then running. 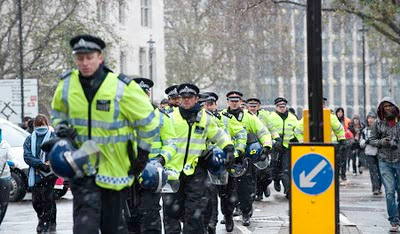 As soon as they were spotted, the crowd would run to follow them. 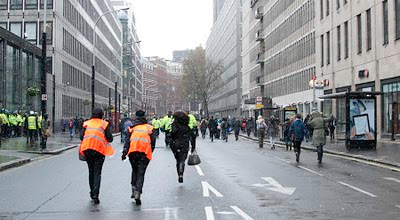 This process was repeated in several directions at once, resulting in what was anyway a small crowd being further dispersed around the streets of Westminster. This meant that the agitating fomenters never had enough of a crowd to turn the mood.

Obviously, traditional past-times like Throwing the Cone were a part of things, but even this was frowned upon by many of the students, who stood on the pavement shouting quietly at the more exuberant demonstrators not to give the rest a bad name. 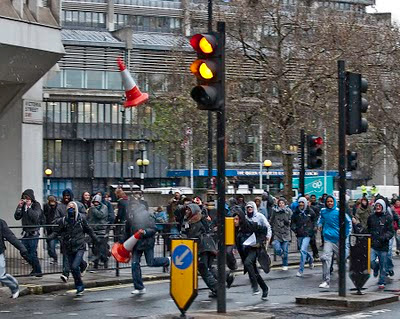 More pictures in PhotoBof later, and the exciting prospect of a little video entitled "Running with the Pipers." Don't miss it.
Posted by BOF at 09:07 No comments: