Today being the 19th anniversary of the poll tax riots and the eve of Financial Fools Day, it was never going to be entirely quiet. And so it was that in the middle of the afternoon, the area of the City containing tomorrow's targets, those vile banks, sprang to life with gaudily striped plastic ribbons, strung from post to post. A small crowd gathered, made up in the large part of newsgatherers. 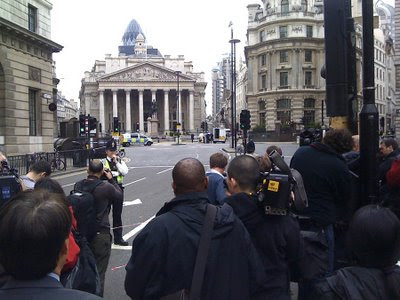 "You're still too close to it" said the portly policeman, gently ushering inquisitive onlookers back a few feet.
"It" turned out to be either a suspect package or a bomb, depending on which officer of the law was speaking.
A few minutes later, those paying attention heard a small and unremarkable bang - a controlled explosion. Very few on the street appeared to notice, accustomed as they are to London's ongoing background symphony.
All the while, tomorrow's casual dressers whittered into their cell-phones. There was a satisfying look of concern on many of the faces, but no sign of actual fear - yet.
The BOF fell to talking with a veritable Humpty-Dumpty of a City of London Policeman, who informed him that, yes, Bank station would be open all day tomorrow.
Many of the exits from Bank station are in the very spot where the Four Horsepersons (sic) of the Apocalypse marches meet at 11.00 tomorrow.
Oh yes, this is England.
Posted by BOF at 16:00 No comments:

The UK Law does not allow smoking in the workplace, under any circumstances.
There will be a Smoking Lounge at the G20... 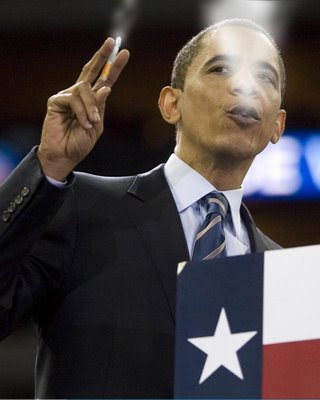 Expectation and disappointment are familiar companions. London hosted two major events today, both of which have received pre-publicity that even Max Clifford would be proud of.
First came the march and rally. The BOF attended the latter part of this and was suitably chilled by the starkness of the message: Archbishop Beaver is right: God is not giving any help. Nor, it would appear, are the years spent in the classroom by any of the speakers, at least not the years learning maths.
As early April showers spattered the small crowd, the worm from Blackadder told us that thousands of people were still coming in. This was repeated a few minutes later. The BOF craned his neck, but could see no sign of the arriving masses. A few late-comers were drifting in from the route of the march, many of them wearing the day's must-have fashion item, an RMT logo, but thousands there were not.
Later, watching the second event, empty red seats vied with red England shirts on the TV screen. Let us hope that we will be entertained by organisers of the march claiming that many stayed at home to watch the football, while Wembley claims that a real desire to better humanity kept football fans away - a preposterous notion, obviously, what with football being more important than life and death.
Clearly, lessons have not been learnt, as this was a perfect example of the modern desire for sustained growth in expectation. Just as sustained economic growth can only lead to the kind of mess we're in now, so growth in expectation can only lead to cataclysmic disappointment. Expect wailing and gnashing of teeth very soon.
Posted by BOF at 19:27 No comments:

The traditional opening of the rioting season is nearly upon us as the G20 approaches. Even now, effigies of Fred Godwin are being prepared to burn on the street and masks of discredited politicos are selling out in the shops. Associated Newspapers are buying up whole forests for 32-page supplements "PICTURING THE GUILTY ONES". The rozzers are rubbing hands in glee as they anticipate the overtime. Implementation meetings at Broadcasting House are rife with arguments over where the prime camera positions will be.
And the BOF has a vision, a marvellous vision. Imagine Trafalgar Square, that well-known arena of protest; pan around to the north-west corner - what do you see? Oh yes! It's THE FOURTH PLINTH, standing empty and alone, waiting for the Gormless adornment. All around, balaclava-clad figures dive this way and that, smoke and tear-gas intermingle, batons thrash soft and vulnerable flesh and, for a short time, anarchy rules. But what do we see here? A figure is mounting the plinth, a slightly dumpy, matronly-looking woman in her sixties with an eminently sensible haircut. She has a megaphone in one hand and a perfect roast potato in the other.
"Let's be 'aving you!" she cries, and suddenly all is peaceful again. Middle-England's saviour has arrived with a recipe for peace, and it's foolproof. The tumult dies, the rioters troop meekly home, and the Daily Mail now has to use all that paper it has stockpiled as petitions to install Queen Delia. Move over, EIIR, DIR is here.
Posted by BOF at 09:26 No comments:

As the BOF awoke from his hibernap (a shortened form of hibernation) he was astonished to discover that the Archbishop of Canterbury is trying his hand at stand-up. Very funny he is, too. Delivered with the straightest of possible faces, he tells us that GOD will not intervene to prevent man from being choked, drowned, or starved by his own stupidity.
This is an old joke, perpetuated in the Old Testament, and maintained down the centuries. Given that the old ones are always the best, what can we expect from him next? One thing's for certain: the BOF will not be allowing him to come anywhere near his pond, which is currently writhing with tiny tadpoles and tuneful toads. 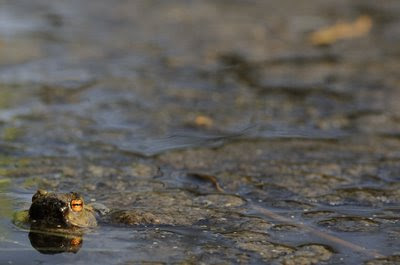 It would be offensive to the BOF's rather old-fashioned beliefs to hear the bearded cleric joking that this was a plague sent from heaven. It has always seemed unfair that these skypilots can work entirely in a universe selectively defined by post-justification and logical certainties masquerading as spiritual insight.
These are serious times, and it is irresponsible of Archbishop Beaver to joke like this. He should receive the same treatment as Ross and Brand did when they misused the airwaves as a vehicle for private and puerile jokes: ban the man. God won't intervene to stop that happening either.
Posted by BOF at 08:28 No comments: