It's quiet for a moment, then all the graves open up and dancing begins.

Go to the new restaurant above the French House, Polpetto. It is what we all want as our neighbourhood eatery, but never get. If you live in Soho, you're lucky. If you don't, get on a bike and go there. No more need be said on this subject.

Guitars, however, require  a paragraph or two.

The BOF's big brother died a bit ago and left him a lovely guitar, a Strat of the finest fret and finish.  BOF had always been a keyboard man, playing at the side of the stage in the Marquee, the Greyhound, the 100 Club, and other little hell-holes of the seventies. He had watched the axe-men in his band, Peaches, grinding it out on Gibsons, a Gold and a Black. He may be wrong, but he seems to remember that the Gold came from the 50s and cost around 2 grand then.

Scouting Denmark Street today, the BOF ended up in Vintage and Rare Guitars, a shop that sells what it says it sells.  He'd tried to avoid it, but Hank's only sells acoustics and the rest seem to have given up on old Gibsons.

The BOF, you see, had decided that he must have the Gibson to complement the Fender, such is his new joy with the electric fretboard. Remembering his days on the loud boards, a Gold seemed to be the answer, preferably from the 50s.

It would appear that they can now set the axe man back a cool quarter of a million. Except, it's probably not axe men who buy them, more likely ghastly Bob Diamonds and the like, who hang them on their loft walls encased in perspex and never so much as strum an Emi7. Investment value, apparently.

Fuck you, Diamond and your ilk.

The BOF will have to settle for something a little newer, when it turns up. But he is now determined to have one, to punch out that hairy humbucker sound. Sadly, the BOF's vile neighbours (more diamond-types) are leaving soon to Chase the dollar, so he won't be able to entertain them at 11 on the dial at 11 at night, unless his new friend from Denmark street calls very soon.

If rev Jones were a good man he would be burning not just the Koran but also the Bible. The transformation of folk history and self-help systems into Religion, no matter the name, is at the root of so much that is disgraceful about humanity. The self-important posturing of the priesthood then cements this disgrace in a formal hierarchy.

When the disgraceful behaviour is not attached to a specific "god" we seem to find it easier to reject. There is very little difference between the behaviour of the German hierarchy in the middle of the last century and the destructive self-interest of a priesthood. Yet we can easily reject and condemn "the Nazis" while shying away from the same condemnation of the disgusting Christian fundamentalists who seem hell-bent on dragging civilisation backwards.

The BOF suggests a little test. Every time a story such as that emanating from rev Jones hits the headlines, substitute a name from the German High Command, and watch your own reaction. If you turn blue with anger, it is a bad thing that is being written about. If, however, you merely turn pink with indignation, it is probably just the writing that is a bad thing; indeed, you are probably reading the Daily Mail.

But remember this, Mail reader: in order to burn his books, the bible basher has to have bought them. Money for old soap. Hah!
Posted by BOF at 07:50 No comments:

An 'orrible mutation has occurred. Somehow, the yoof product of the sink estates and the loud public schools have combined.

The result is a loathsome object, the RaRaChav. Watch out for it, and do all in your power to grind it to a powder under your heel.

You have been warned.
Posted by BOF at 11:21 No comments:

The BOF is big on Barclays' Bicycles; he uses them most days for scooting around on short journeys. Even on the slightly longer treks, it's very hard to work up any kind of sweat: the rewards for pedalling harder are so small that it's not worth the effort.

He has been puzzled by the apparent lack of rational behind the placement and spread of docking stations, the places where the bikes live. Heading south, the casual rider cannot even approach the river until Dolphin Square, location for many a twin-bedded research meeting. The same curious barrier occurs westward: Holland Park is your limit.

It is perhaps a worthwhile exercise to consider the daily routine of the scheme's larger-than-life chief proponent,  Major Boris. If you were to draw a line on the map between his home and his office, and if you were then, for decency's sake, to pad this out by an equal amount to the north and the south of the line, until a pleasing rhomboid is evident, you have the exact distribution of the bicycle stations. 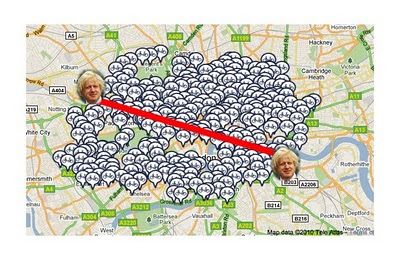 The BOF hopes that the same technique is being applied to CrossRail, and is even now preparing a letter to the Major, suggesting a slight re-routing and a station outside his own front door.
Posted by BOF at 11:10 No comments:

So there's a facebook group dedicated to moving Blair's book to the crime section in bookshops. Let's hope it gathers some momentum.

The BOF is reminded of a conversation that took place between John Birt, loathed BBC boss, and a putative publisher of his memoir. Much to the publisher's surprise, he suggested not just one book, the memoir, but two, the second to be a tome on management, Birt-style.

Recovering from the shock of this unexpected announcement, the publisher had the presence of mind to reply as follows: "Ah! John Birt on management, eh? And where would you expect the bookshops to place this? On their comedy shelves?"

That was the end of the negotiations. It may be the last time the management book was mentioned. It hasn't been published, although the grimy memoir has been and gone.

Day 2, and the BOF is still holding out. Looking a little smug, in fact. He's currently using the delusion of it'll-all-be-ok-after-the-first-three-days-of-nicotine-withdrawal in order to lurch from needful moment to moment.

Before Stop Day he was aked by the WitchDoctor to list particular smoking moments that he reckoned he would miss the most. On Day 1 each of these moments reared up like a cornered sabre toothed tiger. But Day 2 sees them as already anachronistic.

What's certain is that the BOF has developed a new interest in food. So many new eating opportunity moments open up. No sign of the fabled re-awakened palette yet, and the cough stays just as hacky.

but me no butts

The BOF is attempting to give up smoking.

That way of putting it would annoy his WitchDoctor.  "I am a non-smoker, and shall be so for the rest of my life" is the given line. The BOF told the WitchDoctor that, no, he would not be responding to the offer of a cigarette with these exact words.

Offered a cigarette later in the day, those were the actual words with which he replied. The BOF believes it to have been a slightly long-winded ironic joke; but we have to ask: is it programming? Was there really any choice? Could the BOF have replied in any other way?

The system is called hypno-therapy, but it's more like suggestion and relaxation. The possibility is now there for the BOF to get himself into exactly the state that is so terrifying while driving on a motorway, although the WD insisted that this would not occur as an accidental by-product.

Should you read of the BOF being found in the smouldering wreck of a car on the side of the motorway, blame the WD. Or perhaps it's an attempt to start smoking again which has gone wrong. The sheer pleasure of that first, deep, drag on the stick, which sends a ripple of pleasure through the...AR-R-RGH!
Posted by BOF at 08:27 No comments: